Ocean wave forecasting is based on phase-averaged spectral models. Their accuracy critically depends on the quality of forcing fields, including winds and sea ice, and on the accuracy of the parameterizations for wind-wave evolution (generation, nonlinear evolution and dissipation).

The understanding of wave evolution processes has made important progress in the last decade and recent numerical model developments have shown important error reduction in the significant wave height when compared with satellite altimeter (typically less than 10%). This can be attributed to a better understanding of wave dissipation processes, either for swells or the breaking of locally generated wind-waves. Today the model errors in absolute terms are highest around the marginal ice zones (MIZ). 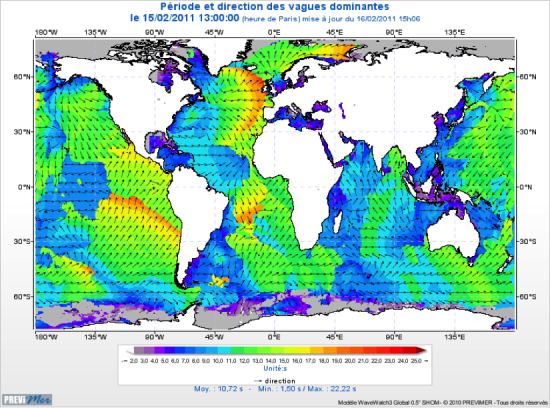 Building on our experience with Boltzmann-type equations for wave scattering by bottom topography, our goal is to work from the waves-in-ice models (see WP3 and WP5) to produce scattering cross sections and adapt the numerical techniques already implemented in WAVEWATCH III for wave-bottom scattering. Friction under the ice will also be included in a form similar to the effect of air-sea friction already used for swell dissipation. Remote sensing observations will be used to validate the models in the near field of the ice and on a large scale (see WP4).

The objectives of the WP laid out in the SWARP proposal are to “set up both forecast and hindcast
simulations on the Arctic Ocean with the wave model WAVEWATCHIII (r).” This deliverable D2.3
particularly focuses on the first production of model output using parameterizations in realistic
conditions.

The objectives of WP2 laid out in the SWARP proposal are to “develop, implement, and test
parameterizations for waves-in-ice propagation in a wave model.” This deliverable
particularly focuses on a preliminary development, implementation and test.

The objectives of WP2 laid out in the SWARP proposal are to “develop, implement, and test
parameterizations for waves-in-ice propagation in a wave model.” This deliverable D2.2 particularly
focuses on the testing of parameterizations in realistic conditions and the preliminary production of
model output.

Our dear friend Alison Kohout (NIWA, NZ, member of the SWARP scientific advisory committee) is breaking the news with her paper in Nature

The SWARP project has received funding from the European Union’s Seventh Framework Programme for research, technological development and demonstration under grant agreement no 607476